Who is responsible for providing most of Oak Park’s services?

Why focus on The Village of Oak Park?

We started with The Village of Oak Park’s budget because it is the governing body for the community.

Who are The Village of Oak Park’s elected officials?

The Village of Oak Park operates under the Village Manager form of government. An elected Village Board president and six trustees set policy, but hire a professional manager to oversee day-to-day operations and the delivery of municipal government services.

What services is The Village of Oak Park, responsible for providing?

Where can I find The Village of Oak Park’s budget?

The budgets are posted on The Village of Oak Park’s website.

How did you build it?

This project had two primary parts to it: the data collection and cleanup and the website itself. All the code and data are open source on GitHub.

The website was built by Derek and is based off of the open source Budget Breakdown code developed by Derek Eder, Nick Rougeux, Open City and DataMade, which has been used to visualize budgets for Cook County and Macoupin County, IL, the City of New Orleans, Washington State and New York State. We customized the code to fit Oak Park’s budget and match the colors of the Village flag.

The data was collected, extracted, and cleaned by Alicia. Using an open source tool called Tabula, we were able to select and extract budget tables from the fiscal year 2017, 2019 and 2021 adopted budget PDFs. Once the data was converted to 3 separate spreadsheets, we merged them together into one spreadsheet with 9 years of budget data using our data cleanup script.

To understand the process we used to verify that the converted budget data match the source PDF, it is helpful to know what information the budget PDFs include. Each budget PDF we reviewed includes expense line items. Each line item includes:

To illustrate this format, here is page 58 of the Fiscal Year 2017 Budget: 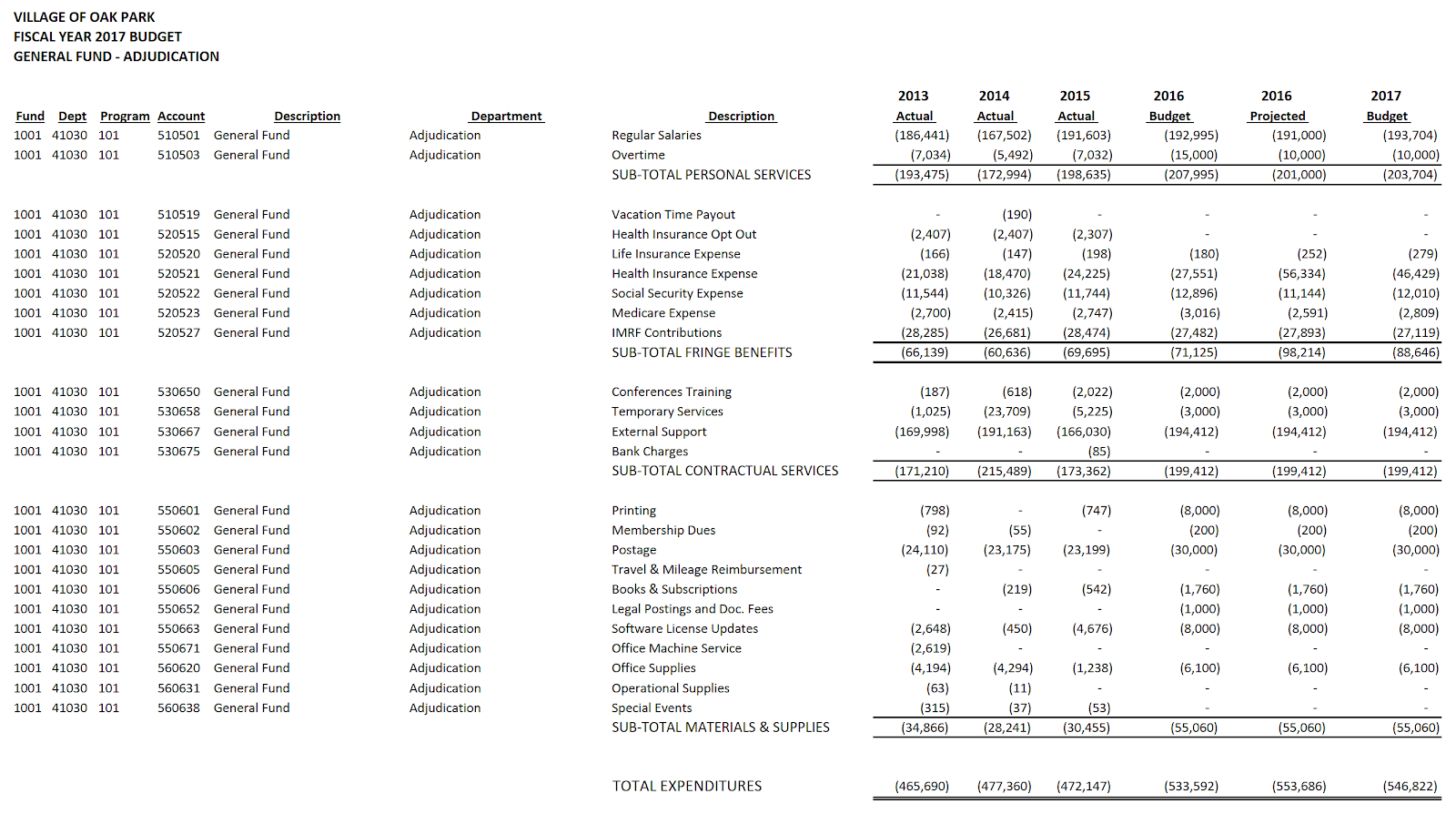 Though the budget contains line items’ actual amounts, it does not report a total for these actual amounts for the entire budget. The budget only publishes a total for the estimated expenses for that single budget’s fiscal year. This means that we could not verify if the totals calculated in our spreadsheets for actual line item amounts matched a total value reported in the same budget. To compensate for the budget’s lack of total actual amounts, we ensured that the budget’s reported total estimated expenses for its fiscal year matched the total calculated for the same estimates in our spreadsheets. If those totals matched, we were assured that the applicable line items had been converted successfully and completely. Once the totals matched, we visually compared our spreadsheet with the source PDF to catch any omissions or errors from other reported years.

Were there any issues with the budget data?

There were several issues we encountered when preparing the budget data for this site:

Notice a bug or have a feature request?

Budget: Oak Park continues to be a work in progress. As more people use it, we plan to add improvements and features to the tool. If you have a feature suggestion or notice a bug, please file a ticket here.

If you have additional questions not already answered in this FAQ, please email us at info@budgetoakpark.com.